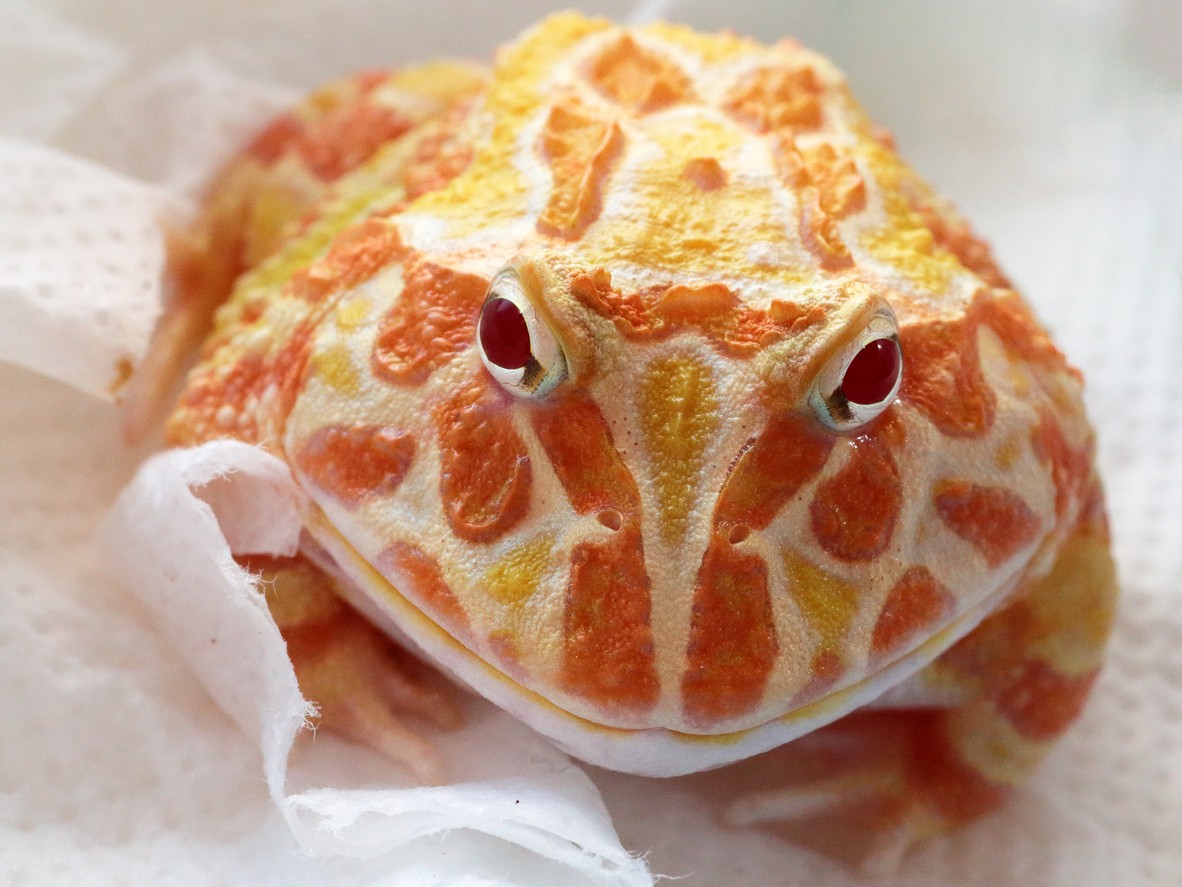 What is the Strawberry Pacman Frog? It’s a type of horned frog native to South America. Because of its round shape, large triangular mouth, and resemblance to the Pac-Man video arcade character, this colorful amphibian is aptly nicknamed the Pacman frog.

Although they’re not poisonous, the Pacman frog is a hands-off creature because it has:

If you’re looking to see this colorful, eye-catching, exotic friend, check one out at the MO safari park.

There are eight species of Pacman frogs, all in the genus Ceratophrys and all native to South America. The Pacman has a round and squat body, with jaws as wide as its head and species-specific blotchy patterns across their backs, usually in brown, tan, green, red, and/or yellow combinations. Males are typically more colorful than females; however, females are larger.

The Pacman frog comes in more than 18 different color morphs. The strawberry morph is named for its resemblance to the colors of a strawberry: red and orange with orange to red spots and a creamy white underbelly.

The frog does not have actual horns. Flaps of skin sticking out over its eyes give the appearance of horns on top of the frog’s head.

Different types of Pacman frogs are categorized and named per their skin and color patterns, some of which include:

Pacman frogs are loners and eat other frogs, including other Pacmans; therefore, they are kept separately. In the wild, they mark their territories to warn other frogs of their presence.

Strawberry Pacman frogs are docile and inactive, except when feeding. They’re bold in their attacks and have a voracious appetite. When hungry, they bite anything that moves. Dozens of specialized teeth help them hold their prey until they can pull it into their oversized mouth, consuming it whole.

Strawberry Pacman frogs communicate through various vocalizations. Male frogs are much more vocal than females. Croaking begins around six months after birth. They croak and vocalize for various reasons, including:

Males also croak, chirp and scream to get the female’s attention during mating season. Pacman frogs thrive in warm, humid environments. In the wild, they spend a lot of time hiding underneath damp leaf litter, typically in tropical swamp and rainforest environments. Although they’re strictly terrestrial and poor swimmers, they journey to swamplands and marshes to breed and lay eggs. A female frog can lay between 1500 and 2000 eggs at a time. That’s a lot of eggs, and it explains why female frogs are so much larger than their male counterparts.

The tank/enclosure should replicate their natural environment and include live plants, clean water, hiding places, and damp substrate material, such as coco coir (ground coconut fiber), allowing the frog to burrow into it. The tank will also need a shallow bowl of water that can be easily removed and placed back in the tank.

A Pacman frog thrives with 12 hours on and 12 hours off lighting schedule. Natural lighting may work, but using a fluorescent light is recommended.

Avoid radiant heat because it will dry out their skin. Unlike some reptiles, Pacman frogs don’t require a temperature gradient. Pacman’s enjoy constant temperatures throughout their enclosure.

If temps get too high or the environment too dry, Pacman frogs enter a period of estivation. They cover themselves with a thick, protective layer of skin, creating a cocoon-like structure to trap moisture and aid respiration. They remain motionless and reduce their metabolism substantially. It often appears to be dead. When conditions are more favorable, however, it sheds this outer layer. Then the frog goes on as if nothing has happened, although its appetite is even more voracious than usual. Fingers beware!

Most reptile enclosures are covered with a screen or a plastic slotted top. These covers allow airflow and boost ventilation which is important for the Pacman frog to breathe. Without proper ventilation, the Pacman may develop skin infections as well. Full-grown adult Strawberry Pacman frogs may weigh over a pound; however, they’re more likely to weigh only half of a pound. The female frog is much larger than the male frog. Female frogs can reach 5 to 7 inches, whereas males generally only reach 3 to 4 inches.

Pacman frogs are ambush predators, sometimes called lazy predators. They’d rather stay comfortably burrowed in the substrate and wait for their meals to come to them.

Strawberry Pacman frogs are insectivores and carnivores and have a voracious appetite. Their diet typically consists of insects and small mammals (such as mice), frogs, small reptiles, and small fish in the wild.

They are also cannibalistic. Larger Pacmans, at all stages of growth, will eat smaller Pacmans. Females have even been known to eat their smaller mates.
The Strawberry Pacman frog has a sticky tongue that catches prey and pulls it into its mouth. The Pacman frog’s mouth is so large it can swallow an animal half its size.

Pacman frogs are the only type of frogs with vomerine teeth and maxillary teeth.

A pair of vomerine teeth grow from the roof of the Pacman’s mouth and approximately 40 cone-shaped maxillary teeth are on each side of its jaw. These specialized teeth, located only in the upper jaw, make it difficult for prey to escape as the frog works to swallow it whole.

When a Pacman takes in prey too large for it to swallow, the frog often chokes to death because its specialized teeth prevent it from releasing its catch.

Pacman frogs are known to bite when hungry or threatened. Although a Pacman frog bite can draw blood and cause discomfort, the frog doesn’t have fangs or venom; therefore, they’re not poisonous.

Although a Pacman frog can be fed dead insects and animals using tongs, providing them with live animals and insects encourages their natural hunting instincts.

Pacman frogs go into brumation (hibernation) to escape harsh winter weather in the wild. They remain in brumation until conditions become more favorable such as warmer springtime temperatures.

A Pacman can hibernate and go without eating for up to one month in captivity. Baby Pacman frogs less than a year old should never be allowed to go into hibernation. Their little bodies don’t have enough fat stores to make it through an extended brumation period.

Pacman frogs rarely close their eyes. They sleep during the day with their eyelids open. They do, however, appear to blink while eating. However, instead of an actual blink, it’s an eye retraction towards the esophagus, which helps the frog swallow its food.

A Strawberry Pacman frog needs calcium to develop and maintain strong bones. In the wild, frogs extract calcium from the bones of the animals they consume. In captivity, they need calcium supplementation. Calcium powder is either dusted on the insects before they are fed to the Pacman or fed to the insects before they eat them. Either way, the Pacman frog gets the calcium it requires.

The exact number of Pacman frogs that exist around the world is unknown. Although not endangered (they’re classified as Least Concern), their numbers decrease due to environmental factors such as deforestation and climate change. Their status may soon become Near Threatened.

See its beauty for yourself at our Wild Animal Safari Park in Strafford. No kissing allowed, of course. In the meantime, print out this coloring page and create your very own color morph of the Pacman frog.